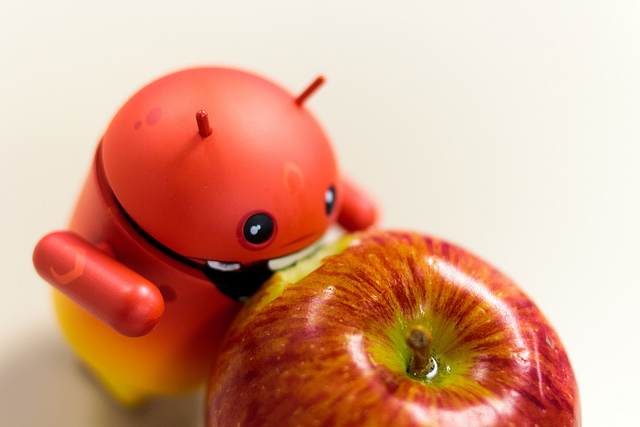 Android smartphones can be an excellent alternative to Apple’s iPhones, especially in developing countries: journalists can choose from a great variety of phones which start at affordable prices. Many Android phones have exchangeable batteries. And they can be rooted and flashed with alternative operating systems which provide updates for older phones and make them run smoothly again. Thus Android phones are very sustainable as they can be used efficiently for several years.

Worldwide, Android smartphones have a market share of about 80 per cent. In some countries, Android has become almost the default platform: e.g. in Spain where Android is running on about 90 per cent of the devices.
Also, Andoid is very popular in developing countries because customers can choose from a great variety of devices which generally start at a very affordable price. A fact that has been well observed by Google: when the company launched its platform Kitkat (Android 4.4) in October 2013, the operating system was specifically designed to run smoothly on the lower-cost hardware that is usually found in emerging markets. And Google’s Senior Vice President Sundar Pichai said: “As we get on our journey to reach the next billion people, we want to do it on the latest version of Android.”
As far a Mobile Journalism is concerned, many news companies do not provide smartphones for their journalists. Instead, the employees have to bring their own devices. And those run mainly – on Android.
So the questions are: How suitable are Android devices for Mobile Journalism? Do they even have advantages over iPhones? And what limitations do they have?

• Price: Even very capable Android devices often cost considerably less than iPhones, and yet they offer a quality that is good enough for online publication or for broadcasting video and audio. In it’s July issue, the leading German technology magazine, c’t, lists three Android flagship devices whose cameras are on a par with or better than the excellent camera of the iPhone 6+. They are: the Sony Xperia Z3+, the Samsung Galaxy S6 and the Samsung Note 4. While the cheapest iPhone 6+ costs 799 Euros in Germany, the Z3+ ships for 595 Euros, the S6 for 525 Euros and the Note 4 for 560 Euros. The Android phones do not only cost less than an iPhone, they offer other advantages, too: some have more inbuilt storage, others – like Sony’s Z3+– are dust and water repellent, which makes them suitable for rougher weather conditions or regions. Even if one doesn’t buy a flagship Android phone, there are lots of midprice devices which provide good hardware for MoJo. That makes Android especially interesting for journalists in developing countries. Plus: young companies like OnePlus and start ups like Wileyfox promise good hardware at even more competitive prices.

• Exchangeable batteries: Many Android phones have exchangeable batteries, so the user can simply buy a new battery and insert it himself. New batteries generally cost between 10 and 20 Euros. That’s altogether much easier and cheaper than to send the smartphone to the manufacturer to have the battery exchanged. Also, journalists can use a second battery as a spare one while they are doing MoJo for changing the battery takes less than a minute.

• Alternative operating systems: Most Andoid phones can be rooted and flashed (= equipped) with a so called Custom Rom, an alternative operating system. These Custom Roms are usually based on Android. The most commonly known Custom Roms are CyanogenMod, MIUI, Paranoid Android and AOKP. CyanogenMod is the most stable alternative for dozens of Android phones. While rooting and flashing smartphones was once quite complicated and dangerous (it could brick your phone = make it unusable), it can nowadays often be be done with one click.
Example: I still own a Samsung Galaxy S II which entered the market in 2011. Then it was in many regards on a par with the iPhone 4s. However, two years ago, Samsung stopped updating the S II with the latest software. The operating system became prone to security risks and new apps ran slowly. I used CyanogenMod’s one-click-installer to root the S II and flash it with CyanogenMod’s latest stable operating system (version 11) that is based on Android 4.4. Since then my S II is running much more smoothly than before and is secure again, too. I think the following could be an interesting scenario: buy several second hand S IIs (each costs around 80 Euros when in a decent shape), insert new batteries, flash the phones with CyanogenMod and use them for MoJo trainings in developing countries. Imagine, you can buy about 10 second hand SIIs for the price of one new iPhone 6+. And the S II is still a capable smartphone for MoJo. In that way, Android phones can be very sustainable.

Once it was true: if you wanted to have all the cool and easy to use apps, Apple was your only choice, as Android was lagging hopelessly behind. Today, most interesting apps for MoJo are still developed for iOS first, but more and more companies realize the potential of Android and offer Android versions too. Or: there are equally good alternatives in Google’s Play Store. Example: FilmicPro is the standard app for iOS users if you want to have a lot of manual control while filming videos. For Android users the alternative has long been Cinema FV-5. But there are now a number of new film apps which are really good, too: like Open Camera, Camera MX.
These are some of the Android standard apps for Mobile Journalism:
Camera FV-5 (photo, also → Camera MX, Open Camera), Cinema FV-5 (video), Field Recorder (Audio Recording), Thinglink (photo, video and audio collages), Soundcloud (audio platform equivalent to YouTube’s video platform), Videoshow: Video Editor and Maker (for quick video editing on the go), Kinemaster (for more advanced video editing), Periscope and Bambuser (both for live streaming), Snapseed (quick photo editing).

Android’s great advantage is at the same time its great weakness: there are hundreds if not thousands of different Android devices to be found around the globe. That’s good for buyers as they can choose from a great variety of smartphones. And it’s a nightmare for developers who have to adjust their apps to this multitude of devices which, moreover, run on dozens of different operating systems.
For Samsung, Sony, Huawei & Co modify Google’s pure stock Android version and add their extras. So a Samsung Android version varies slightly from a Sony Android version and so on. That means that not all apps run equally well on all Android phones. Because for developers it’s a very difficult task to make sure that their apps fit the hardware and the slightly different operating systems of hundreds of different devices. This problem is unique to the Android world and is commonly called fragmentation.
This can be especially annoying when you teach MoJo to a group of journalists who have all brought their own devices. Ususally, after you have introduced the most important MoJo apps, some participants start complaining: „Cinema FV-5 doesn’t run well on my Huawei P 8.“ Or: „This and that app don’t work on my Samsung Galaxy S III.“

Although, while teaching MoJo, fragmentation can be quite a challenge, Android’s advantages outweigh this problem by far.

Note: I wrote this abstract initially for John Sutcliffe and his team at BBC Media Action, an organisation that trains journalists in 28 countries all over the world.